In 2013, I created “Planet Woman: Jewels for Heroines”, a series of body extensions designed to be used as tools for personal empowerment and to assist in questioning the stereotypes of gender and the body beautiful.

The collection comprises four large metal body pieces: the arm extension and the matching shield “Shattering the Glass Ceiling I and II”; the silhouette “Visible”, which increases height and broadens the shoulders; and the bodyframe “Re-Model”, which extends and exaggerates the curves of the female body.

I created these interactive pieces as a way to fight sexism and to express my rejection of conformity to the rules imposed by the hetero-patriarchy. In order to achieve this, I decided to take them out into the streets and invited women and queer people to use them in actions and demonstrations that reclaimed the body as a site of activism and visibility as well as a site for experimentation and pleasure. Each wearer had a chance to interact with the pieces and develop their own personal reaction to them. I have even encouraged people at exhibitions to try on the extensions and see how they could affect their perceptions.

Here, I focus on “Re-Model” (2014) and another piece, “Life-Size” (2015). Both pieces were created as a reaction to mainstream representations of the idealised “perfect body” in large parts of Europe and North America. They are both body frames, the former is hard and heavy and imposes a body shape on the wearer, whilst the latter by way of contrast is soft, light, flexible and follows the contours of the wearer´s body.

“Re-Model” is a metallic body extension of the bust and hips, whose curves increase the size of the silhouette of the female body instead of trying to make it slimmer. It is a sensory piece that gives people of all genders the opportunity to experience a different relationship with their bodies, their environment and their gender, without surgery or permanent change.

One of the motivations for creating this piece was to “visibilise” bodies that do not fit the westernised fashion industry’s “white, thin, young, cis” beauty standards. I decided to base the original extension on my own body, which has the physical attributes and curves common to many Latina women.

I felt really proud to see many different types of people wearing my “body”, and at the same time I hoped that many women in Spain where the piece was exhibited would connect with the piece and feel empowered by seeing their curves taking an active role in public spaces.

At the Valencia Pride demonstration in 2013, transgender activist Graham Bell Tornado wore “Re-Model” (adapted as “The BIron Lady”), and the contrast between the body extension and Graham’s own body were striking. Their thin, white body contrasted with both the curves of the body extension and the predominantly well-toned and muscular “perfect” male bodies “on display” in the parade.

The unsettling juxtaposition of body shapes and gender representations drew a lot of attention and ended up illustrating the article on Pride in local newspaper “El Levante”, displacing the usual stereotypical images of the event.

The piece was also employed in a participatory street action forming a key part of the Intramurs Arts Festival in Valencia in November 2014, when I invited the women amongst the public to take to the streets wearing and interacting with my “Planet Woman” body extensions.

When we reached the main festival venue, a wide variety of members of the public tried on the pieces, although only women were allowed to wear some of the pieces, such as “Visible” (depicted in the photograph below), which is designed to increase women’s height and broaden their shoulders in order for them to occupy more space.

Many women commented that they felt powerful, proud and strong wearing the “Planet Woman” pieces, which were quite heavy to carry, their weight adding another dimension to the interaction.

“Life-Size” is another body extension I designed as a critique of the prejudices and stereotypes of feminine beauty. I wanted to create a piece that might help women to accept and be proud of their bodies, no matter what their shape or size. To reflect the diversity of women’s bodies, I designed a made-to-measure soft body frame made from measuring tapes. These were fitted onto the body of each wearer, revealing their measurements.

On the opening night of the “Patching, Occupying”[1], exhibition, I invited women to take part in the interactive performance “90-60-90? Life-Size!” I hoped that women would feel more comfortable wearing the piece and showing off their measurements proudly in public as part of a large group and that getting together would make us feel stronger. Throughout the evening, so many women volunteered to be measured and fitted with the “Life-Size” extensions that the action was still going on when the venue closed!

To celebrate International Women’s Day 2017, the participatory action involving my piece “Life Size” was repeated in a public square as part of the event “Invisibilities: Discourse on the construction of female identity”[2],
, organised by the EASD School of Art and Design in Valencia. Some participants wanted to keep the piece on even after the action was over and wear it at the march later that day. Some of the women who wore “Life-Size” commented that the fact that it was made-to-measure made them feel special, and others reported that they had developed a close relationship with it and ended up feeling as though it was a part of them. 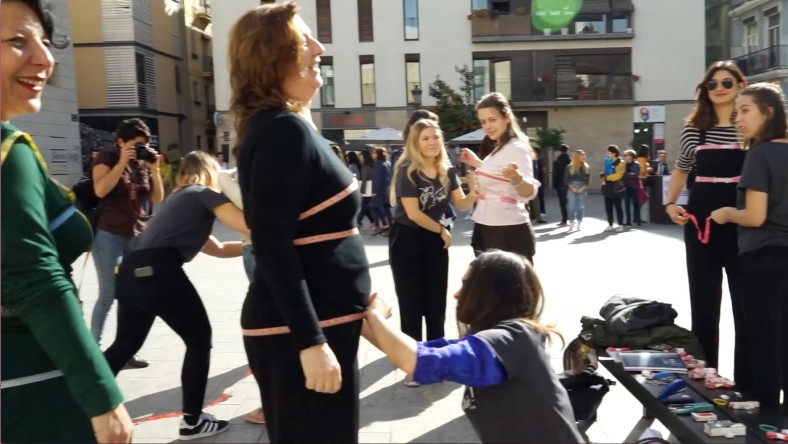 In general, the actions have attracted a high level of participation and have, I believe, created a sense of bonding amongst those taking part. People have told me that they enjoyed the experience of being the protagonists of the work and having the opportunity to experiment. The only complaints I have received have been from cis men, who felt left out because they were not allowed to try on the extensions “Visible” and “Shattering the Glass Ceiling”, which were specifically designed to draw attention to gender inequality. On the other hand, the piece “Re-Model” was quite popular with men, who were curious to feel what it would be like to have a female body and interact with it.

For me, the greatest satisfaction was seeing how each person experimented with the pieces in their own unique and often unexpected ways. I especially enjoyed the entire process of fitting the pieces and interacting with the public in such a personal manner and the shared sense of sorority which developed amongst us all. 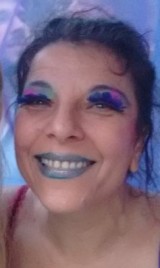 Anna Maria Staiano is a Neapolitan-born trans-disciplinary feminist artist currently based in Spain.

As part of her art practice, “CorpoREaction” (CorpoREacción), she designs performative pieces and body extensions – based on gender, masquerade, transformation and the interactions between body and object – which aim to alter sensory experiences and symbolic imagery. Often the pieces trigger unexpected interactions and are at the core of her participatory actions, performances, photographs and video-art.

In 2016, in collaboration with a host of other feminist and queer artists and activists, she published Impure, a book that breaks the moulds of format, genre, artistic and sexual practices, mixing art with jewellery, performance with fashion, and photography with literature.